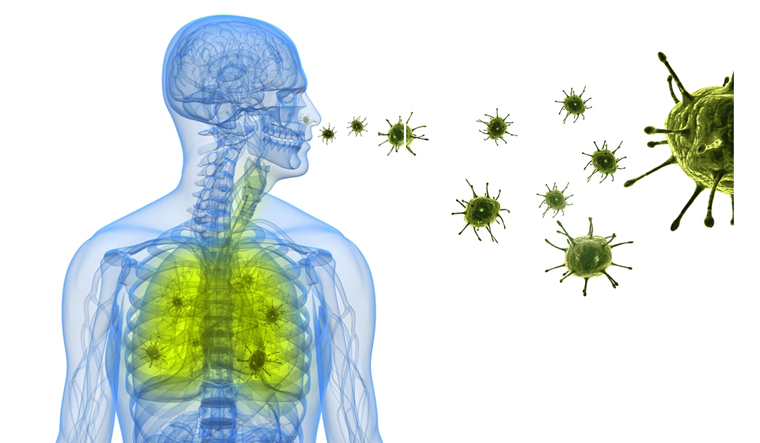 The answer is relevant to how we should respond to COVID-19.

People who have higher respiratory viral loads are significantly more likely to have severe COVID-19; the same pattern held in both the SARS and MERS coronavirus epidemics. More virus in the body does tend to correspond to more severe disease.

There’s far less data about how different forms of exposure correlate to disease severity, but there are a few studies pointing towards a greater chance of severe COVID-19 from household contacts than from travel, and one study indicates that mask usage increases the probability that a SARS case will be asymptomatic. These constitute weak evidence that larger doses of exposure to human coronaviruses cause more severe disease.

When human volunteers are experimentally exposed to viruses, some viruses cause more severe symptoms at higher doses, while some viruses don’t. None of the relevant studies were on coronaviruses, however.

In animal experimental exposures to virus, higher doses consistently cause more severe symptoms, including in experiments on the coronaviruses SARS, MERS, and PEDV.

The available evidence is highly incomplete, but tends towards the conclusion that lower dose exposure to COVID-19 should result in less severe disease.

Here’s a table of studies that compared viral load in mild and severe COVID-19 patients.

This is a flawed proxy for the question of initial exposure, since patients are usually not tested for COVID-19 until at least several days after infection. Higher viral load could indicate that the virus replicated faster inside the body, or simply that the patients were later in their course of disease, rather than that the initial exposure was lower.

Still, the correlation between viral load and disease severity is suggestive as to whether there’s a dose-response effect in COVID-19.

Viral load can be measured with Ct, the number of PCR amplification cycles necessary before viral RNA is detectable. Lower Ct numbers mean exponentially more virus. It can also be measured by delta-Ct, the difference between the number of cycles to detection in a control sample (without virus) and the test sample. Finally, it can be measured by the absolute concentration of viral particles per mL. These numbers cannot be directly compared because the sensitivity of RT-PCR equipment varies and isn’t always given in the papers.

Another question we might ask is whether people with extensive exposure to the virus had more severe illness than people with transient or low-dose exposure.

In a study of 36 children with COVID-19, there was no significant difference in disease severity between those who had close contact with a family member with COVID-19 and those who had traveled to an area affected by COVID-19.[12]

In 1663 patients with COVID-19 in Wuhan, China, there was no significant difference in severity between those who did and did not have a family member with the disease or exposure to the Wuhan seafood market, but were significantly (p<0.0001) less likely to have severe disease if they were healthcare workers compared to the general population. On the other hand this may be because healthcare workers are younger (most of the patients were retirees.)[13]

Overall it doesn’t seem that the relationship between disease severity and magnitude of exposure to infected people has been much studied in COVID-19.

However we do have two Chinese studies indicating that severe cases of COVID-19 are more common in those who had frequent long-term exposure to other patients (i.e. sharing a household with many other patients) and less likely in those who have had transient contact with patients (as in travel to an epidemic-affected province.)

Viral Load in Other Human Coronaviruses

In 75 SARS patients, there was no difference in the rate of positive viral RNA samples at diagnosis between patients who later developed ARDS and those who did not.[16]

In 154 SARS patients, viral load in nasopharyngeal aspirated was associated (p < 0.01) with diarrhea, oxygen desaturation, mechanical ventilation, and death. Death was 54x as likely in patients positive for viral RNA than negative. [19]

In 21 MERS patients, blood positivity for MERS RNA was associated with much lower survival (p = 0.017) and higher rates of needing mechanical ventilation (p = 0.003). Higher respiratory viral load was not associated with survival.[21]

In 14 MERS patients, viral load was not significantly associated with mortality but plasma and respiratory viral loads were significantly higher in severe than mild cases.[22]

In 102 MERS patients, respiratory viral titers were significantly (p = 0.0087) higher in patients who died than patients who survived.[23]

The evidence seems very consistent that_ higher viral load correlates with more severe and deadly disease_ in both SARS and MERS.

Exposure Effects in Other Human Coronaviruses

Among 80 health care workers in Singapore exposed to SARS, 45 were serologically positive for the virus. Of those 45, healthcare workers were significantly more likely to be asymptomatic (p = 0.025) if they used masks.[24]

During the SARS epidemic in Hong Kong, there was no significant association between the risk of death and any disease source (household, hospital, community-acquired, airplane, or none of the above.)[25]

In 1649 SARS patients in Beijing, contact with a SARS patient prior to illness was not a significant predictor of mortality.[26]

Healthcare workers with confirmed MERS infection were younger, more likely to be female, and less likely to have comorbidities disease than other cases of MERS. They also had significantly (p < 0.001) lower risk of death and higher chance of being asymptomatic.[27]

MERS patients have a higher risk of mortality (HR = 2.9, p= 0.001) from hospital-acquired infections as opposed to other routes of infection such as household contacts or camels; even after adjusting for age and comorbidities.[28]

Hospital-acquired MERS infections are more deadly than other sources of infection, but this may be confounded by the fact that patients who are already in hospitals for other reasons tend to be sicker.

The one piece of evidence from SARS and MERS that points to low-dose exposure being safer is that wearing masks is more likely to result in asymptomatic SARS infection than not wearing masks.

Humans have been experimentally exposed to viruses (usually with milder effects than SARS or MERS) in a few challenge trials; this can help us ascertain whether there’s a dose-response effect to the quantity of initial viral exposure on the severity of the disease symptoms.

In 127 adult volunteers inoculated with various doses of ECHO-11 virus, there was a dose-response relationship with infectivity, but dose had no effect on the severity of upper respiratory symptoms in the infected group. On the other hand, high-dose cases were significantly more likely than low-dose cases to have lower respiratory symptoms (cough, sore throat, laryngitis). Prior challenge reduced symptoms upon rechallenge, and more for the high-dose-prior-exposed than the low-dose-prior-exposed group.[30]

Across 36 studies with different doses and strains, there was no association of higher doses of influenza with higher chance of the subjects becoming ill.[31]

In a study of 57 adults infected with different doses of Norwalk virus, higher doses were associated with significantly (p =0.001) faster time before symptom onset and longer (p = 0.04) duration of illness, as well as a dose-response relationship in probability of infection.[32]

In 35 adult volunteers, there was no association between the dose of RSV administered and the viral load or the probability of infection. Symptom severity, however, as well as cytokine levels, correlated closely with viral load, both across patients and within patients over time.[33]

In 155 young adult volunteers infected with different doses of rhinovirus, daily symptom scores were consistently higher in those exposed to higher doses. Higher antibody titers and higher doses of virus were associated with higher rates of infection.[36]

Whether higher initial doses of virus correlate with more severe symptoms or higher probability of having symptoms at all, seems to depend on the virus. There is no relationship between dose and symptom severity in human volunteers exposed to adenovirus, influenza, and rotavirus, but there is a relationship in echovirus, rhinovirus, and norovirus, and the results are ambiguous in respiratory synctial virus.

It remains unclear how well any of these observations translate to COVID-19. Unfortunately there were no studies comparing the effect of dose on the symptoms of any of the mild human coronaviruses.

There was a dose-response relationship between initial inoculation dose, probability of infection, and probability of death, in H5N1 and H7N1 influenza in turkeys, chickens, and ducks.[41]

Probability of infection, probability of clinical signs, and survival time all varied dose-dependently by the inoculation dose of H5N1 in pigeons.[42]

A H0N1 strain of influenza in mice had a dose-response relationship for both infectiousness and mortality; it was more deadly when introduced to the respiratory tract than intranasally.[43]

A PR8 strain of influenza has a dose-response relationship with serum viral load, weight loss, clinical score, and mortality. The low dose and high dose groups had similar antibody and leukocyte recruitment levels as the high dose, but no mortality. [44]

Both mice and guinea pigs exposed to SARS virus had a higher probability of increased rectal temperature at higher doses of virus exposure. For guinea pigs, ID50 = 5.47 log CPE50, or 50% of guinea pigs were infected at 5.47 * log (the dose at which 50% of cells died).[47]

Simian immunodeficiency virus, closely related to HIV, had a dose-response relationship with the probability of infection in macaque monkeys, but steady-state (2-week) viral load among those infected did not correlate with initial dose. There was no correlation between survival time and dose.[48]

Low-dose challenge with SIV successfully produced “silent infection” (no symptoms or viral RNA but virus-specific T cell proliferation.) However, when these monkeys were exposed to a high dose of SIV, they were not immune but became infected and developed AIDS-like disease at the same rate as naive monkeys.[49]

Dose-response relationships between virus inoculum and infection rate or death seem to be common in animal studies, and consistently, including in coronaviruses, higher doses cause more severe symptoms.

However, in at least one case (SIV) a dose of virus that was low enough to produce asymptomatic infection did not produce immunity to future exposures, so we can’t assume that low-dose exposure always brings immunity.

[11]Lescure, Francois-Xavier, et al. “Clinical and virological data of the first cases of COVID-19 in Europe: a case series.” The Lancet Infectious Diseases (2020).

[27]Elkholy, Amgad A., et al. “MERS-CoV infection among healthcare workers and risk factors for death: Retrospective analysis of all laboratory-confirmed cases reported to WHO from 2012 to 2 June 2018.” Journal of infection and public health (2019).

[29]Couch, R. B., et al. “The minimal infectious dose of adenovirus type 4; the case for natural transmission by viral aerosol.” Transactions of the American Clinical and Climatological Association 80 (1969): 205.

[31]Yezli, Saber, and Jonathan A. Otter. “Minimum infective dose of the major human respiratory and enteric viruses transmitted through food and the environment.” Food and Environmental Virology 3.1 (2011): 1-30.

[47]Chepurnov, A. A., A. A. Dadaeva, and E. M. Malkova. “Symptoms of infection caused by SARS coronavirus in laboratory mice and guinea pigs.” Doklady Biological Sciences. Vol. 397. No. 1. Nature Publishing Group, 2004.

[49]Dittmer, Ulf, et al. “Repeated exposure of rhesus macaques to low doses of simian immunodeficiency virus (SIV) did not protect them against the consequences of a high-dose SIV challenge.” Journal of general virology 76.6 (1995): 1307-1315.