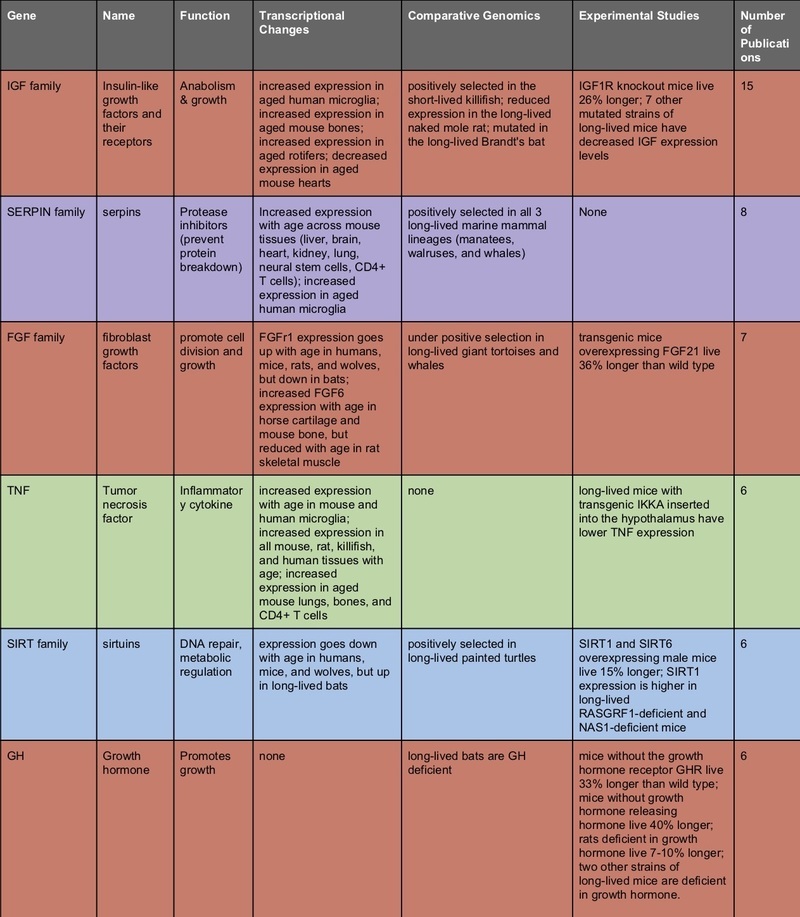 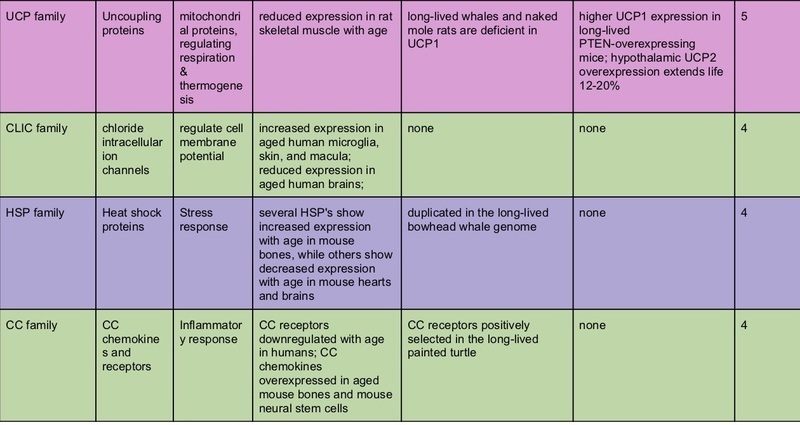 Longitudinal Transcriptomics  You can compare the expression of genes in tissue samples from old vs. young organisms (humans or mice) and see which genes are expressed more or less with age.  Today it’s even possible to get single-cell resolution on gene expression; we can identify the rate of gene transcription for each gene in a specific cell at a given time.  Similarly, you can get proteomics data, directly measuring the quantity of each protein in a tissue sample.  This gives us correlational information about which genes are altered in the aging process, in particular tissues and cell types. It doesn’t by itself tell us which interventions might prevent disease.  If a particular gene is more expressed with age, it could be because it’s a cause of some deleterious process, or because it’s a symptom of that process, or because it’s part of the body’s attempt to mitigate that process.  Whether you want to inhibit that protein’s activity or production depends on what it’s doing, and expression levels by themselves can’t tell you that.

Comparative Genomics  Animals don’t all age in the same way. Some are exceptionally long-lived, either in absolute terms (whales, elephants, tortoises, rockfishes, the Greenland shark) or relative to their size (bats, naked mole rats). Some mammals are immune from cancer.  Can we identify “genes responsible for healthy longevity” in the animal kingdom? Could we “borrow” the adaptations that slow-aging animals have developed, as treatments for humans?  Given the genomes for two species, you can identify homologous genes – genes that have very similar sequences and probably similar functions.  Something like half our genes have homologues in common with insects and all vertebrates.

If the homologue of a gene in an exceptionally long-lived species is absent or has a loss-of-function mutation, you might ask whether that gene contributes to aging.

If a gene shows evidence of positive selection in a long-lived species, you might ask whether that gene has a protective effect against some aging process.

Again, these are all correlational; they don’t tell you how the gene works, or what would happen if you interfered with it experimentally.

Experimental Genetic Modifications  If you induce a genetic mutation in a mouse gene and the mouse lives longer or avoids the onset of age-related diseases, then you do have causal evidence that the gene is involved in regulating aging.  There are a variety of ways of inducing specific mutations, some permanent and some temporary, some causing total absence of the gene (knockout) while others cause a deficit (knockdown) or unusually high production of the gene product (overexpression.) Looking for the Intersection Most broad studies (longitudinal transcriptomics, comparative genomics) looking for genes involved in aging come up with totally different lists of candidate genes.   Sometimes, of course, this is expected, because they’re looking at different tissues or different organisms. You don’t expect all animals or all tissues to change in the same way with age. And, of course, comparing genomes between species and comparing gene expression over time within one species are apples-to-oranges comparisons.

But even in cases where the experiments are supposed to measure the same thing, there’s poor replication. And that’s not surprising because the samples are so small. It’s not uncommon to see longitudinal transcriptomics studies with fewer than ten organisms in the “old” and “young” groups.

And this matters because if you want to have any hope of translation to humans, you’ve got to be able to have results that are consistent across different strains of mouse, or even species of mammal; if it’s all wiped out by natural variation between organisms, there’s no way you’re getting signal usable for designing human treatments.

So I did a very, very crude type of meta-analysis; I looked at all the studies I could, out of these three types (transcriptomics and proteomics of aging; comparative genomics of aging in long-lived species; and interventional studies of genetic modifications; all restricted to studies on vertebrates) and ranked genes (or gene families) by the number of papers in which the gene popped out as significant.

There are a couple of potential flaws in my methodology.

First of all, I used Google Scholar to search, and stopped when the relevant search terms stopped returning studies of the relevant type. There may well have been studies this search method missed; it’s just much more time-efficient than using PubMed searches (which reliably produce far less relevant results, but it’s easier to document exactly how many papers matched search terms, which is why they’re the standard method in formal literature reviews.)

Second of all, I didn’t use a consistent cutoff in picking out which genes were significant. (In a study that tests all 20,000 or so human genes for differential expression, “statistically significant” is a very low bar.) I generally noted down the handful of genes that had the highest fold change and lowest p-value, not literally all the ones that met a significance threshold.

Thirdly, some studies, of course, like lifespan studies of a genetic modification, aren’t unbiased screens of all genes; genes that have gained more scientific interest are likely to be studied more often, so in part this list of “top genes” reflects the biases of the research literature.

And, finally, since we’re comparing different types of studies, we’re not making apples-to-apples comparisons. You don’t expect the genes differentially expressed with age to be exactly the same as the genes which are modified in long-lived organisms or the same as those which alter lifespan when experimentally mutated. If a gene shows up in all three types of studies I think that’s some sort of evidence that it’s “more likely to really be involved” in aging, but not in the same straightforward sense that it’s true that a study is more credible when it replicates exactly.

However, I think it’s worth doing something in this vein, as a way of helping orient ourselves in a growing field. As more and more papers come out claiming that they’ve found genes “associated” with aging, we want to be able to be familiar with what the most common ones that keep showing up are.  Just as with genome-wide association studies for genetic predictors of disease, one correlation showing up in a study doesn’t mean we’ve found the “gene for” anything. I think of the aggregation process as a learning experience, for getting a sense of what the field as a whole looks like.

Here’s a histogram of the frequency of the distribution of the genes. 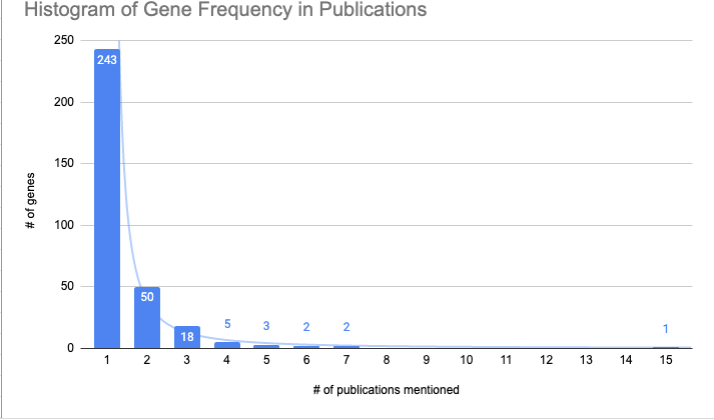 The majority of genes only appeared in one paper; most genes that were significantly related to age or lifespan in one paper did not show up in any others.

Interestingly, [22] clusters gene transcripts in human T cells according to their aging-related dynamics, and finds three kinds of genes:

From a therapeutic perspective, if this pattern generalizes, I could imagine we might want to enhance production or activity of proteins in the third cluster, inhibit the production or activity of compounds in the second cluster, and be cautious about the tradeoffs in the first cluster, since both straightforwardly inhibiting and accelerating nonspecific growth signals can have serious side effects.

It’s hard to tell, for now. But in order to replicate this result you’d also need more studies to use multiple time periods, instead of just taking old and young samples; once again, increasing the scale of longitudinal transcriptomic studies would be very valuable.

38. Pickering, Andrew M., Marcus Lehr, and Richard A. Miller. “Lifespan of mice and primates correlates with immunoproteasome expression.” The Journal of clinical investigation 125.5 (2015): 2059-2068.